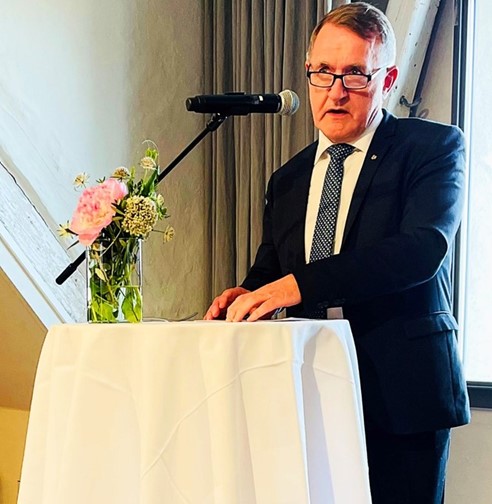 First, I would like to express my gratitude for the opportunity to speak to you today. Secondly, I want to thank all of you for spending a couple of hours in the beautiful surroundings here at our representation in Copenhagen.

The world in is constant change and current developments in our part of the world demonstrate that it is not always for the better.

The current tragedy that is taking place in Ukraine at this very moment, reminds me that we must never take peace for granted.

But being here in this room today together with some hundred high ranking officials from all around the world gives me hope and it gives me confirmation of the power of unity. At the same time, it reminds me of the great responsibility that lies in our offices and that we all play a part in the pursuit of peace and stability.

The Faroe Islands want to play their part, and we want to do so alongside our western allies. The political world stage is a very fluid place just now, and as like-minded nations we must continue to base our relations on rules and mutual respect and observe and protect common values. Doing so will equip us better to meet the challenges the years ahead will bring.

Together with our allies, the Government of the Faroe Islands condemns in the strongest possible terms Russia’s unprovoked and illegal armed attack on Ukraine.

Our desire to impose restrictive measures in line with our allies required new legislation in the Faroe Islands and last month our Parliament unanimously passed a bill authorising the Government to implement sanctions against Russia and Belarus. The executive order implementing the restrictive measure will come into effect this week.

Constitutionally, the Faroe Islands are a self-governing nation within the Realm of the Kingdom of Denmark, and almost all areas of responsibility – taxation, research and education, business regulation, international trade, fisheries management, social security, and infrastructure to name but a few – are exclusively Faroese.

However, foreign affairs, security and defence remain areas of shared competence between the Faroese and Danish governments, and a continuous dialog between Tórshavn and Copenhagen is therefore at the core of matters of defence and security. During recent years, the dialog between the Faroese and Danish governments on these matters has undergone significant positive developments. As set out in the Fámjin Declaration of 2005 the Faroese government is part of all processes and decisions of relevance for the Faroe Islands.

Our geopolitical neighbourhood in the Arctic and North Atlantic is characterised by security, stability, and prosperity. In terms of security, NATO is of course the common denominator for us and our neighbours.

At last year’s NATO summit, the High North was mentioned as an area of priority for the first time. Focus is also turning northwards.

It has also become increasingly clear over the last decade or so that the High North is under scrutiny by great powers. China has named itself a near-Arctic state, Russia has prioritised its military capabilities in the region and the United States has increased its naval presence. Indeed, we have in last few years been able to welcome vessels from the US Navy in the Faroe Islands. Indeed, as we speak, the Faroe Islands are offering host nation support to a major NATO exercise taking place in the North Atlantic.

The geographical position of the Faroe Islands in the GIUK-gap renders us as a strategically interesting or perhaps even important place. A position we are conscious of and a position that gives us a chance to take part in the dialogue with our neighbours about security in our region.

This recognition of responsibility was materialised a few days ago when the Faroese and the Danish Governments signed an agreement to establish an air surveillance radar at the summit of Sornfelli on the Faroe Islands.

The radar is part of the Danish Government’s Arctic capabilities package which is aimed at increasing situational awareness in the Arctic and the North Atlantic.

We see the radar agreement as an important contribution to the maintenance of peace and stability in the region, in support of NATO’s deterrence and defence objectives.

The Faroese economy is a very open economy. Our national income comes largely from exports of seafood, while most products for our daily lives are imported.

International trade and business cooperation is therefore key to economic growth in the Faroe Islands. For many years, we have enjoyed such cooperation with several countries and markets, and lately we have formalised further partnerships with important partners.

Japan is also an attractive market for us, and in April 2022 we signed a Memorandum of Cooperation with Japan. Both parties see great opportunities in our cooperation that will comprise multiple levels of commerce and culture, and we are already taking steps to put our agreement to work.

Being one of the EU’s closest neighbours in the European Arctic, the EU is an extremely important partner. The Faroe Islands have expressed strong interest in building and developing an even closer and more dynamic relationship with the European Union. These efforts have spurred constructive discussion within the EU, both on enhancing the bilateral relations and to work towards a more balanced trade agreement

The Faroe Islands were pleased to be one of the first counties that signed a post-Brexit trade agreement with the UK. This made sure that our bilateral trade flows could continue without too much disruption, and the first bilateral fisheries agreement was signed on 8 February for 2022, which marks a good start to our future collaboration with the UK on the exchange of fisheries opportunities.

The Faroe Islands see valuable partnerships in other countries as well, and at the moment, we are in constructive and promising dialog with Korea, China and Brazil.

I would like to end by expressing my great appreciation to you all for your efforts as ambassadors and officials who promote and cultivate strong international relations. With the new threats we are seeing, we need your skills and efforts more than ever because close and dynamic relations are fundamental to the further development and understanding between all our countries.

Thank you for your attention and please enjoy yourselves.